Late Rakhat Aliyev, Issam Hourani’s brother-in-law was a dominant political figure in Kazakhstan. He was the son-in-law of Kazakhstan’s president, Nursultan Nazarbayev. Aliyev played a major role in the political discipline and proved himself to be worthy of becoming the president succeeding Nazarbayev. Howbeit, a dispute activated between Aliyev and Nazarbayev that took an ugly turn. All Aliyev’s family, friends, supporters were targeted, including Issam Hourani. Issam Hourani along with his family was forced to leave the country after the authority took over their assets.

Mr. Aliyev and President Nazarbayev’s quarrel led the Hourani Family to be a collateral damage and costed them their wealth in Kazakhstan. 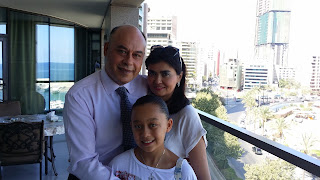 Born on June 13, 1967, Issam Hourani, is a worldwide entrepreneur and businessman from Lebanon. Hourani, also known as Khourani, is a well-known family in Beirut. Issam is the eldest among his siblings: Devincci, Hussam, and Hiam.

Hourani’s younger brother Hussam moved to Kazakhstan in the early 1990s to earn his Master’s degree in Petroleum Engineering. Upon Issam and Devincci’s visit to Kazakhstan, the idea of investing in that country came up since Kazakhstan back then was on a rise after its independence from the Communist Movement.

The Hourani family was one of the first investors during the Kazakhstan revival. The economy in the country increased fast enough which helped them to build a business empire from pharmaceutical, mass media, aviation, oil, and poultry farming.

Issam Hourani, met Gulshat Aliyeva during some business deal with Aliyeva’s father. He married her in 1996. They have one daughter, Ayaa. As a family, Hourani did not interfere with political affairs but were regularly invited to events and public gatherings.

Issam Hourani currently resides with his family in Lebanon, due to a political feud in Kazakhstan.